Our parish is blessed to have two choirs - the Ukrainian Choir "Banduryst", founded in 1924, and the English Choir, founded in 1967. The first choir was organized by Anton Stangrychuck (later Reverand) when the parish was just starting in Tremont. Stangrychuck served as the first parish dyak and choir director. This choir performed at many plays and concerts to raise funds for the church, and became known as the "Banduryst" Choir. In 1932, the group had over fifty members, and they traveled to other cities to sing.

The English choir, organized by Joseph Marciniuk, was formed to fill the need for the English service at the Parma Chapel in 1958. When the present church opened in 1966, the two liturgies (English and Ukrainian) needed two choirs, and that is what we have today. Over the years, the choirs have performed on Voice of America, local Cleveland events, pan-Orthodox Christmas concerts, and countless liturgies, baptisms, weddings, and funerals. The two choirs often join to sing bilingual liturgies throughout the year. 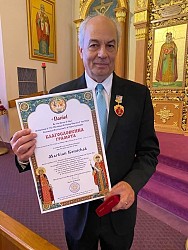 Our current choir director is Markian Komichak, hailing from Pittsburgh, PA. He has a Master's degree in Musical Composition from Cleveland State University and has studied direction of renowned choir director Wolodymer Kolesnyk. If you would like to sing in the choir or get in contact, please email him at komichakm@gmail.com.

We are blessed to have many cantors and readers in our parish, chanting and reading in both languages on Sundays and on other feast days and holy days, baptisms, weddings, and funerals. If you would like to become a reader or would like to read the epistle on a Sunday, please contact the clergy.

The Ukrainian Church Music Archive is a project started by our choir director Markian Komichak, as a way to collect, study, systematically archive, and share historical choir music from Ukrainian churches all over the country. His primary interest is not so much in the content of the music itself, but rather with other musicological concerns, like the choice of the repertoire, the style of notation, the peculiarities of the words and language that were used in those days, and so on. He is interested also in finding out information about the individuals themselves, their names and the dates that they served in those parishes. To learn more or to contact him, please visit the official website, Facebook or Instagram pages for this project.